The most grizly topic in the Parker/Hulme case, please remember: it is a real-life tragedy. 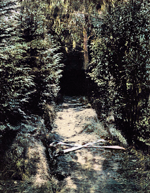 On the afternoon of 22 June 1954, Pauline Parker and Juliet Hulme had gone for a walk with Parker's mother, Honorah Rieper, through Victoria Park in Christchurch. Approximately 130 metres (430 ft) down the path, in a wooded area of the park near a small wooden bridge, Hulme and Parker bludgeoned Rieper to death with half of a brick enclosed in an old stocking. After committing the murder, which they had planned together, the two girls, covered in blood, fled back to the tea kiosk where the three of them had eaten only minutes before. They were met by Agnes and Kenneth Ritchie, owners of the tea shop, whom they told that Rieper had fallen and hit her head.
Rieper's body was discovered in Victoria Park by Ritchie. Major lacerations were found about her head, neck, and face, with minor injuries to her fingers. Police soon discovered the murder weapon in the nearby woods. The girls' story of Rieper's accidental death quickly fell apart. 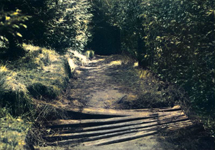